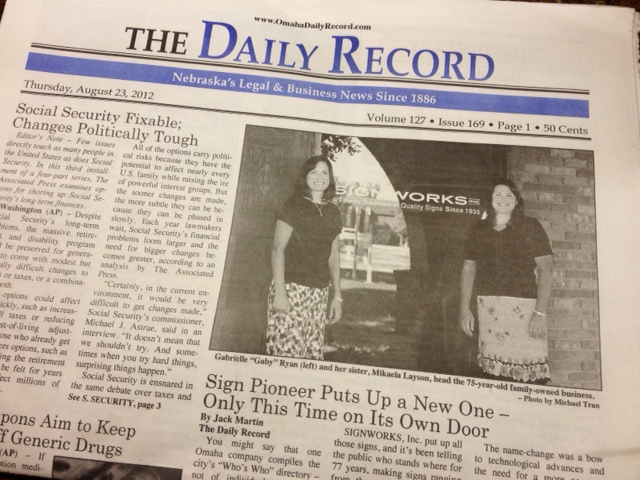 Thank you to The Daily Record for the opportunity to be featured in your publication!

Read the story here and here:

You might say that one Omaha company compiles the city’s “Who’s Who” directory – not of individuals, but businesses. For example, who has that building at 90th and Dodge streets? American National Bank, that’s who, as its towering multicolored and lighted banner says.

How about that apartment building near TD Ameritrade Park? It’s the 9INES.

Or that store branded with the figure of a bat-wielding baseball player, also near the ballpark? That’s the Dugout sports clothing store.

SIGNWORKS, Inc. put up all those signs, and it’s been telling the public who stands where for 77 years, making signs ranging from the two-story tall letters atop the Woodmen of the World tower to a one-inch tall vinyl nameplate for someone’s office desk.

“The company was started in 1935 by our great-grandmother, Elizabeth Hatcher, and it’s been family-owned ever since,” said Mikaela Layson, who with her sister, Gabrielle “Gaby” Ryan, owns the firm located at 4713 F St.

The name-change was a bow to technological advances and the need for a more accurate perception of the firm, Mikaela said.

“The use of neon has declined in favor of light emitting diode (LED), which uses less energy and also offers a cost saving – neon is an art form and therefore is time consuming. Also, we felt that if people perceived that we only did neon signs it might hurt business; we actually do much more than that.”

“Everything the company builds is made from scratch,” Mikaela said, “whether from racks of sheet aluminum, strips of LED or laminates.”

The move away from neon is not the only change that has come about in their business, she said. “We used to hand-paint all the letters but now we use vinyl graphics.” The letters are cut out by a computer-operated “plotter” device.
Giving a visitor a recent tour through the company’s spacious building, Mikaela pointed to another device: “Here we have the neon bender. The artist heats a stick of glass and bends it to the desired shape, which can follow just about any design or letter arrangement. The finished tubes are filled with either neon or argon gas to create the desired illumination color – neon for red, argon for blue.”

Mikaela and Gaby grew up in the business founded by their great-grandmother, who was followed by Elizabeth Aust, their grandmother, and she in turn by Dorsey Olson, their mother. Alden Aust, Elizabeth’s husband, left his own large and lasting imprint on Omaha – he was the first city planner and was project manager and designer of the Gene Leahy Mall.

Mikaela started working in the vinyl area, then on Installation trucks and finally in the office. Gaby also began in vinyl, then moved into the office.

Both continue a tradition of strong customer service.

“The one thing I enjoy most,” Gaby said, “is helping a client from start to finish, on exterior and interior signs, so we can provide a cohesive package.” One example of that, she added, is the 9INES apartment building near TD Ameritrade Park. “We did the main outside sign, plus the parking lot signs, and even did the numbers on the apartment doors.” In a whimsical extra, it was decided to dress up the rather plain white fronts of dryers in the laundry area with some colorful labels.

Some of Omaha’s most prominent businesses have employed SIGNWORKS, including the trucking company Werner Enterprises, Inc. and Borsheim’s jewelers (for their signs in Werner Park baseball stadium), and the online store Hayneedle. The firm also has done restoration work for other clients, including La Casa and Piccolo Pete’s restaurants, Wolf Bros. clothing store and Charlie Graham Body & Service auto repair.

One of the largest and most challenging jobs SIGNWORKS has done was the striking, soaring Qwest sign on the downtown arena now called CenturyLink.

“The Q in Qwest was nine feet tall,” Mikaela said, “and the logo Q was 20 feet tall. The span of the sign reading ‘Qwest Q Center Omaha’ was 96 feet long. Each of the two sets of letters had more than 1,300 feet of neon.”

The company not only designs and builds new signs, it also repairs those that have become worn or damaged. For example, one in the shop is from Sullivan’s Bar, the longtime establishment on Farnam Street. The sign was the victim of a hit-and-run. “It was built back in the 1940s and now we’re going to fix it,” Mikaela said.

Yet another old neon sign awaiting refurbishing couldn’t help but catch one’s eye: It shows a pink pig reclining atop letters that spell out, “Oinker’s.”

“That’s the name of a bar in Atlantic, Iowa,” Gaby explained with a smile.

So how has SIGNWORKS managed to stay around since 1935? Its website (signworksomaha.com) offers a couple of reasons, one of which is versatility: “It doesn’t matter if the sign you require is a 25-foot tall main ID sign with a message center, or a two-inch high set of interior letters.”

And secondly, “Over the years many competitors who have sold cheaper signs have come and gone. Our belief that there will always be a market for quality has proven true over and over again.”

“I love working with SIGNWORKS,” she said. “Gaby and her team are professionals who really know their stuff. They are great to collaborate with when developing the best solutions for our clients.”

POSTED IN: What Makes Us Work, In the News