What Makes Us Work: Jeff 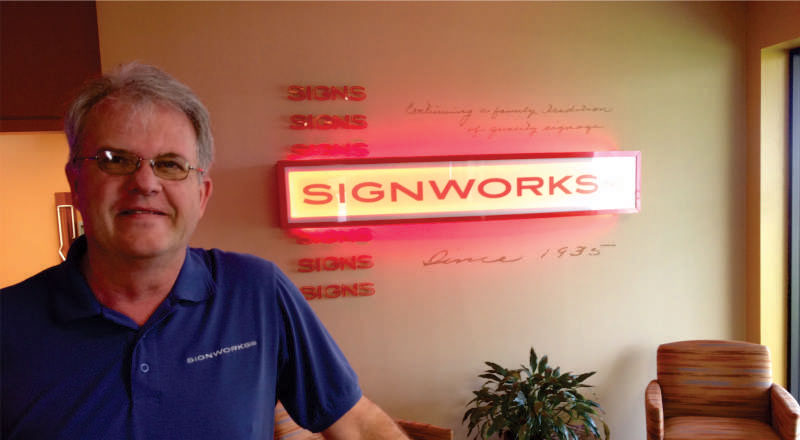 This is Jeffrey Hayden

Jeff Hayden is vice president at Signworks and a third generation Signworks employee.  Jeff is a licensed Master Sign Erector and in June will be celebrating 40 years with Signworks.  Manufacturing quality custom signs requires a team that is led by someone that can face any challenge.  Jeff is the Lead Estimator but he is really the quarterback of our team.  His talents and duties stretch to all departments as he oversees every project that comes our way.

Jeff says his responsibilities include “doing a little bit of everything – estimating, sales, purchasing, meeting with architects, engineers, managing some of the larger projects in the shop.”  Brainstorming and troubleshooting are two of his biggest strengths.  Jeff has the ability to think three dimensionally and build signs in his head before the concept even hits the drawing board.

Jeff is on the City of Omaha’s Sign Erection Examination Board – a group that meets to oversee and enforce sign codes and award journeyman and masters licenses. Currently the group is working to ensure that new sign codes match new technology and that LED integration and conversion from traditional neon happen effectively and efficiently.

We caught up with Jeff on a recent afternoon as he was working through several estimates with hard deadlines.  He took a moment to share some of his story.

Jeff’s tenure started at Signworks in 1973.  Back then it was Neon Products and located at 1331 Park Avenue in Omaha’s Field Club neighborhood.  He was a teenager when his mother dropped him off for a summer job.  He never left. “They had me doing all the dirty jobs” Jeff said. “I was cleaning the shop, hacking weeds in the alley, hauling stuff to the dump. But at the same time I was watching and learning.

It was an easy place for Jeff to be as his father Harry Hayden worked at Signworks too.  As time went on Harry became Jeff’s mentor and taught him about signs, the people and the company. “I started cutting plastic, fabricating metal and learning about electrical wiring.” 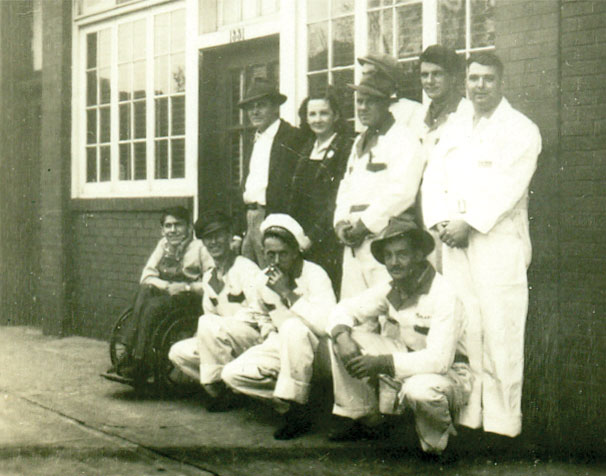 Jeff and Harry worked together for close to a decade until Harry retired.  Jeff’s grandfather, Ben, also worked many years at Signworks after World War II.

“I loved working with my Dad" said Jeff “It strengthened our relationship by being together every day. He taught me a lot.  I reported to the Shop Foreman and after the first year it was in my blood.  I determined that this was what I was going to do.

“I still believe the sign industry is a fascinating industry and I enjoy coming to work every day. Manufacturing signs has challenges that keep us on our toes but, as they say: the greater the challenge the greater the reward.  When I see one of our signs around town that started as a sketch and was built from scratch in our shop on a big exterior wall of a building, or a monument sign outside a local business – I feel rewarded.”

Which projects stand out?

The First National Bank (FNB) Teeter Totter Campaign stands out with Jeff as one of the most fun and unusual projects.  Jeff had this to say about the project: “The engineer said it wouldn’t work. I went ahead and designed and sketched the concept and it did work. The project had two life-size mannequins riding a teeter totter on a billboard.  We dressed them in regular fitting clothes but once winter came FNB got calls from concerned commuters insisting they needed winter coats. So we found clothing and went up and dressed them for our harsh Nebraska winters. There were six to eight billboards around the city as part of the project.  We even had to bring the mannequins down once to put new clothes on them.  Someone had climbed up one of the boards and actually took the clothes off one of the mannequins. After that we used some new hardware to prevent nudity.” 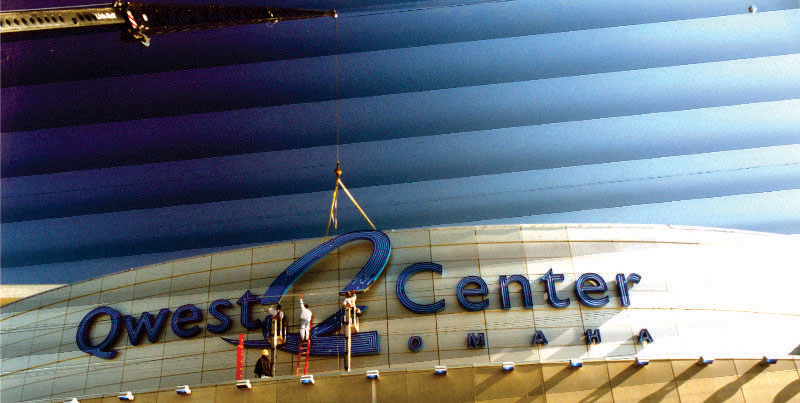 Jeff said the project that made him the proudest was when Signworks came together as a team to manufacture and install the Qwest Center exterior signs.  “How we made that one happen I still don’t know. We really pulled together, went until two or three in the morning for a few nights to meet the deadline.  Those letters and channels had thousands of feet of neon in them and they were built to last.” 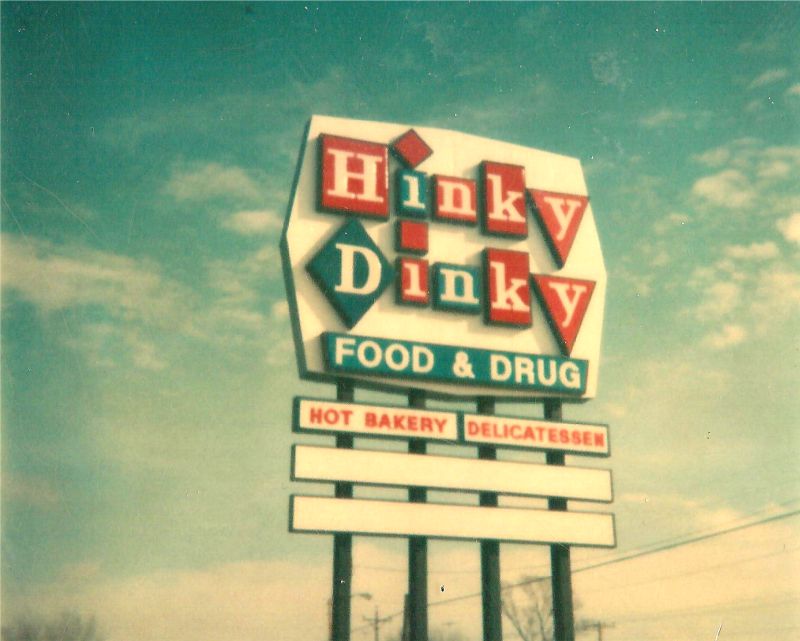 Another big campaign that Jeff remembers is Hinky Dinky Supermarket’s conversion of about 15 sets of channel letters for a group of stores they had just acquired.  It was a big conversion that had to be orchestrated to happen simultaneously. 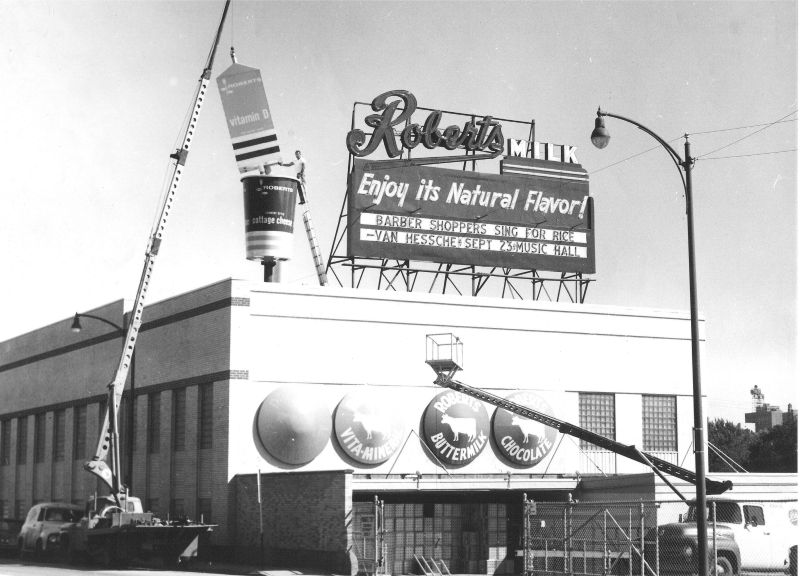 One of Jeff’s favorite iconic signs created by Signworks (then Neon Products) was the Roberts Dairy billboard by Creighton University’s campus. 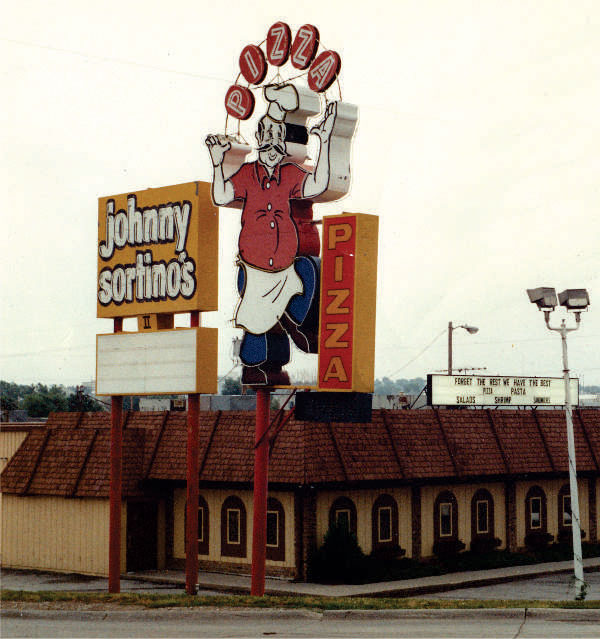 One project that didn’t have a long life due to a building fire was the sign at Johnny Sortino’s Pizza at 72nd and Pacific, nearly identical to the one above at their 'L' Street location.  Jeff particularly liked that sign because of its uniqueness and how it was created. He said the design started based on the classic neon cowboy that Signworks built for Wolf Brothers Western Stores at 70th and Dodge Street. "Sortino’s wanted something similar," Jeff said  "The Sortino’s sign was so interesting, it had the pizza chef throwing the dough and it was lit in neon that pointed down to the restaurant. The sign was interesting enough to be featured in the documentary called “Neon – An Electric Memoir” that was produced by Signs of the Times' trade publication.

"Signage can be used as a marketing tool. Every company should have a sign that they're proud of that represents what they do.  A storefront sign--whether it’s a projecting sign, a wall cabinet, channel letters, a monument sign---is the most basic form of advertising and nothing can replace it or send a clearer message.  It’s the most cost-effective and pragmatic approach to identifying and marketing your business.  As long as we have brick and mortar buildings, signs will be necessary and it’s our job to stay on the cutting edge of technology and offer the end user the highest quality sign product available in today’s market.  That is and always has been our goal.”