What Makes Us Work: Bonnie

This is Bonnie Mullen

Bonnie is a designer and a vinyl graphics pioneer.  There is nothing foreign about the sign industry to Bonnie Mullen, head of the Vinyl Department at Signworks.  She grew up in her family’s sign shop in Norfolk, Nebraska and started painting signs before she was a teenager.  “I painted just about everything,” Bonnie said. “We didn’t use vinyl then and pretty much every sign required a paint job. I painted stock cars, billboards, site signs and parking signs when I was a kid.”

After high school Bonnie left Norfolk for Omaha and attended College of St. Mary where she received a bachelor’s degree in Art.  Working in the PR and Copy Center for her college work study program she was able to utilize her layout, design and calligraphy skills to fulfill sign, poster and certificate award requests around campus.  While considering her career options she decided to keep her skill in the industry that was so close to her heart.  Bonnie set up several interviews with Omaha area sign companies.  Signworks-- which at that time was the Neon Products Company-- was her first stop.  After her interview at the female-owned, family-operated company she knew she had found her place.  Bonnie said the owners gave her comfort. “I was the only woman outside of the front office but knowing they were in charge gave me a lot of confidence. I was a shy Catholic girl from a small town now working in the Big City.”

Bonnie started at Signworks hand-lettering signs, weeding, masking, applying and installing vinyl.  "After a few months I started working on the Signmakers IVB, a machine that plotted vinyl and paper neon patterns for a much quicker turnaround.  It was also used to plot and perforate paper patterns used for hand-lettering.

I later started doing scaled line drawings on the Signmaker IVB for vinyl jobs.  Designers would paste these line drawings onto blueprints for an accurate representation of the completed project.  The Signmake IVB was a state of the art machine at that time and would hold eight fonts."

We were quickly becoming more accurate and efficient with this machine--a new alternative to hand drawing and hand-lettering.

In the late 1980’s Signworks upgraded from 'Big Blue' to the Super Sprint, which was also a 15-inch plotter. This new machine was even faster, had more font and typeface selections AND could hook up to a computer.  This created a much needed method to save and store files. “We used the 15-inch plotter for a number of years then added a 30-inch plotter,” said Bonnie.

"We also added a digitizing tablet that allowed us to digitally recreate company's logos for use on their signage--this was a major breakthrough in the sign industry.  We could digitize artwork, fonts and logos and send them directly to the router or the plotter for production.  We could also use the plotter to perforate mounting patterns for installing anything we routed."

The Apple IIe was the first computer we used to operate the Super Sprint. It allowed us to start using Gerber software--the very first graphic software package.  Gerber software made cutting patterns a much easier and more seamless process.

Technology was really rolling at this point.  Adding the Gerber software as well as a scanner to other processes drastically expanded Signworks' capabilities so we included Gerber System 48 router, which Bonnie was also trained on and operated until high demand required an additional person to take over so she could focus on cutting vinyl and doing designs.  The router worked in unison with Gerber’s software and not only enabled us to make flat cut-out letters and logos but also 'nest' objects to save material.

The Gerber software was a huge advancement for the industry but at the time was software in which we were not able to import and export various types of files, othe than Gerber files which made it difficult to keep up with the demands of the bustling industry.  So in 1994, we made the epic conversion to SignLab software by Cadlink as well as updating to our first 48" friction-fed plotter by Mutoh.  This was a whole new concept introduced to us by Rob Ivers, a sign technology and software leader.

Bonnie and other Signworks employees made a trek to Kansas City to learn the SignLab software and technology taught by Rob Ivers.  This enabled Signworks to cut large-scale graphics with no seams and much more economically.  SignLab upgrades and the introduction of the internet have allowed Signworks to add new printers and plotters to our production process.  Software updates and industry upgrades are what allow us to further increase our capabilities and constantly evolve in this ever-changing market.

It is because of employees like Bonnie with natural talent, deep-rooted passion and commitment to the sign industry that continue to allow Signworks to stay progressive.

Bonnie says it’s the people and her passion for signs that have kept her at Signworks for nearly 30 years. She confesses, “I like what I do.  Most projects pose unique challenges and push us to unveil new discoveries.  We make so many different products that are individualized to our customers. It’s challenging to keep up with the technology but in this age I think everyone strives to stay relevant with constantly evolving technology.”

Which projects stand out?

“This was one of the first vinyl projects I was involved with at Signworks and is memorable because the whole vinyl industry was new to me, except for the white reflective scotchlite my dad and brother used on signs back in the 70’s, which had to be hand-cut. I remember I would make stickers with the scraps."

Bonnie recalls, “This was one of the first jobs I worked on at Signworks, around 1984.  It was also one of the last big hand-painted projects that I worked on.  The project was to refurbish an illuminated cabinet with chasing lights at the location on Leavenworth Street.  We climbed high on scaffold to the existing cabinet then repainted the sign including around each of the individual lights.”

“I remember Dorsey (Olson) coming to me with a photo of what the client wanted and asked if it was possible to do this with cut vinyl on the plotter.  The sign was something like 12 feet tall by 20 feet wide and extremely complex with its colors and gradients.  This became one of the first large scale digital graphic projects that we completed.  We applied the vinyl graphic to the tri-vision panels, which were individually attached to the background structure.  We would then hand-trim the excess film between the panels.  It was something new and was very rewarding when it was completed.”

“We fabricated 4’ x 8’ sintra signs to surround the Ak-Sar-Ben hockey arena with various sponsors.  It was exciting to contribute to what was at the time and continues to be such a renowned venue.” 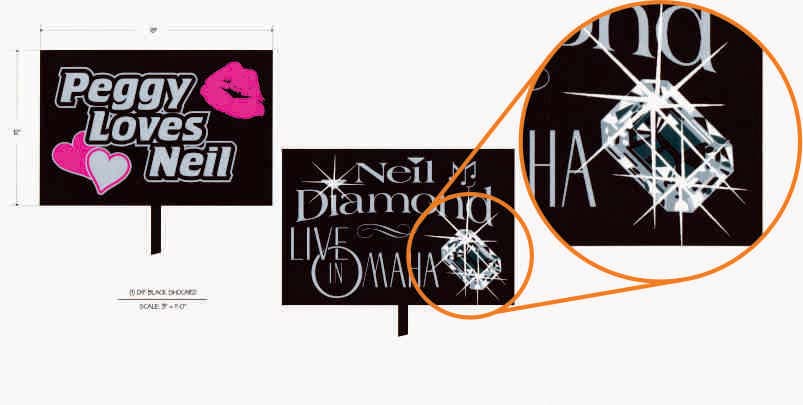 This was also a very fun sign to design for one of Dorsey’s friends who wanted a sign to wave around at the Neil Diamond concert. It was before digital printers were introduced into the sign industry, so making a diamond look 3-D out of vinyl – using various greys, silvers and chrome, was challenging and fun.

15 years later, the client is still using this banner I designed for their grand sales. It is close to where I live, so I see it occasionally and it is a constant reminder of a happy customer and that our materials are of long-lasting quality.

“First National Bank of Omaha uses frosted vinyl as privacy film for offices and conference rooms.  It’s a large-scale, ongoing project that is custom fit for every location.  The FNB Tower is one of the most memorable as there were so many offices.  The vinyl installers and I designed a way to cut and install the individual panels on each door and sidelight in the fastest, most efficient way possible."

This directory was fun to design and included a header with flat cut-out letters and individual name plates that are held in with magnetic tape.  Names are being added and removed often, so the fabrication process makes it easy for the client, who mails the nameplates to us. We then change the vinyl names and mail it back.  The plates are very strong and durable and easy for the client to remove and since the directory is custom made, it is unique and different from most standard styrene/plastic directories.

“We cut rubber stencil for sandblasting the precast pillars to create an etched effect.  The rubber was cut on our regular vinyl plotter using a special 60º blade rotation and the highest pressure and the slowest possible speed setting.  this material is always a challenge to work with and this particular project was different than what we are accustomed to doing but it turned out beautifully and adds a special detail to the serenity of the park.”

POSTED IN: What Makes Us Work, Dimensional, Vinyl